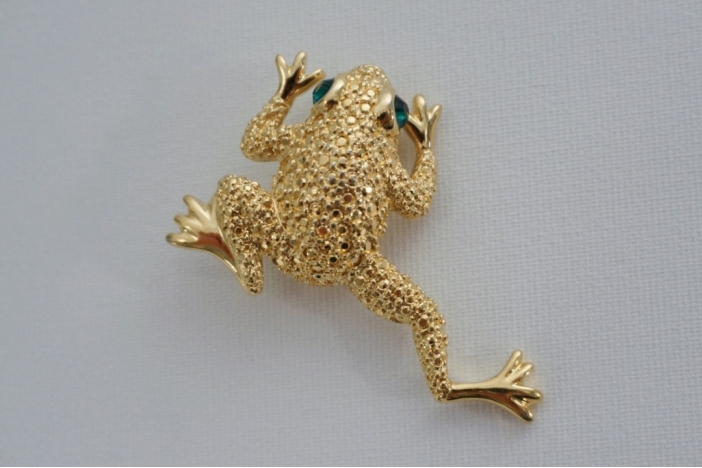 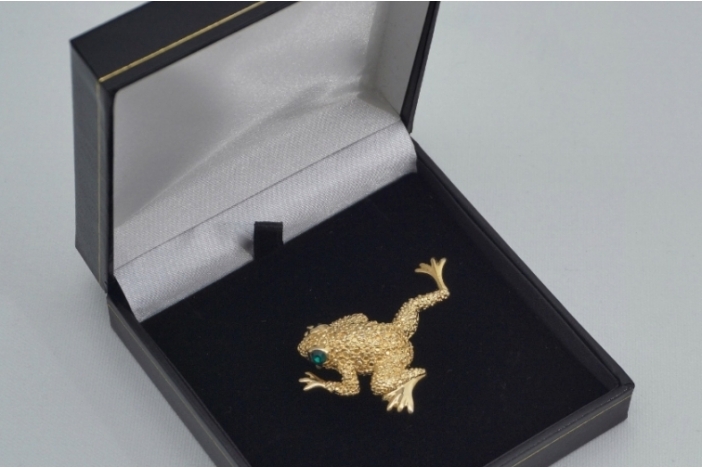 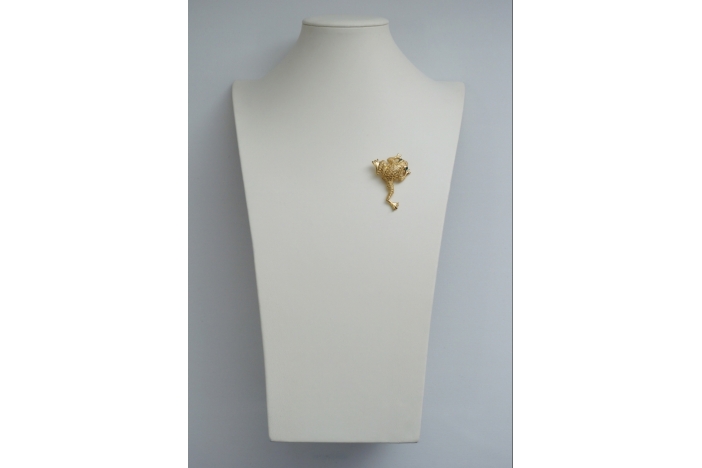 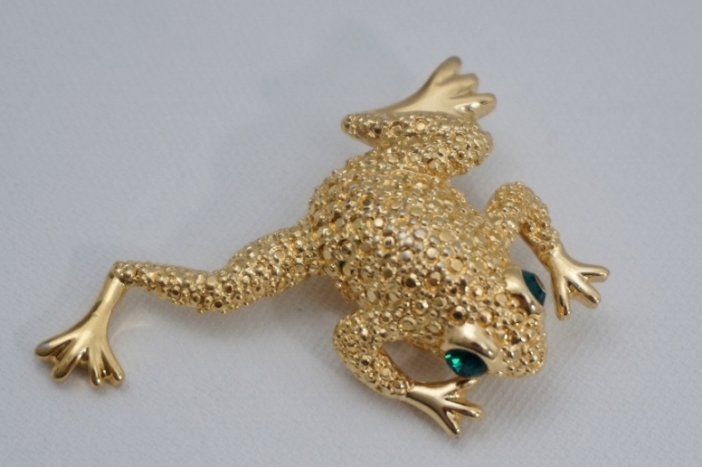 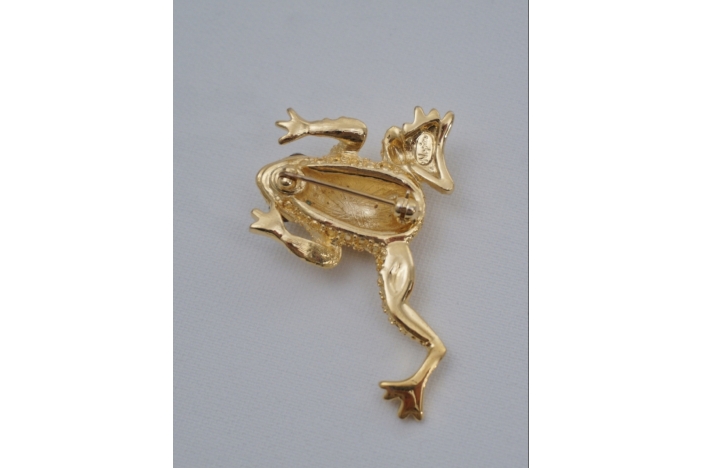 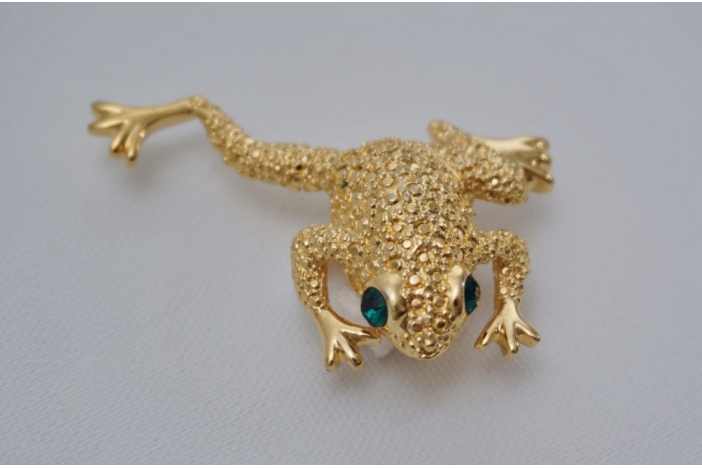 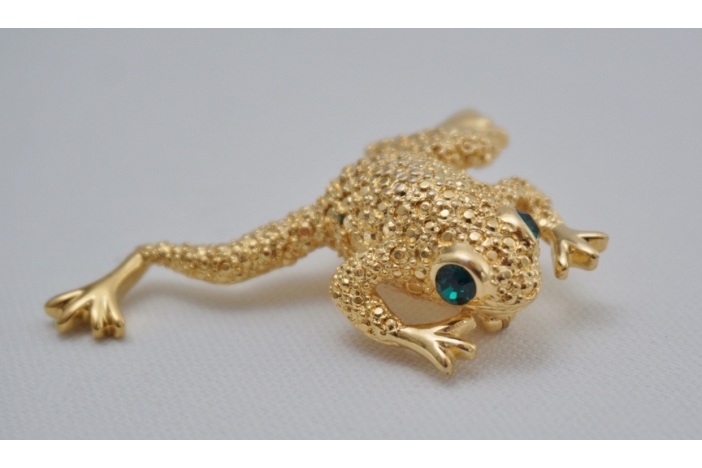 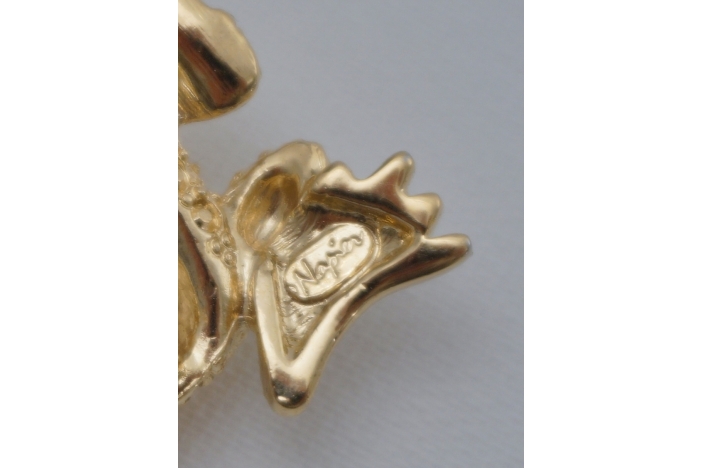 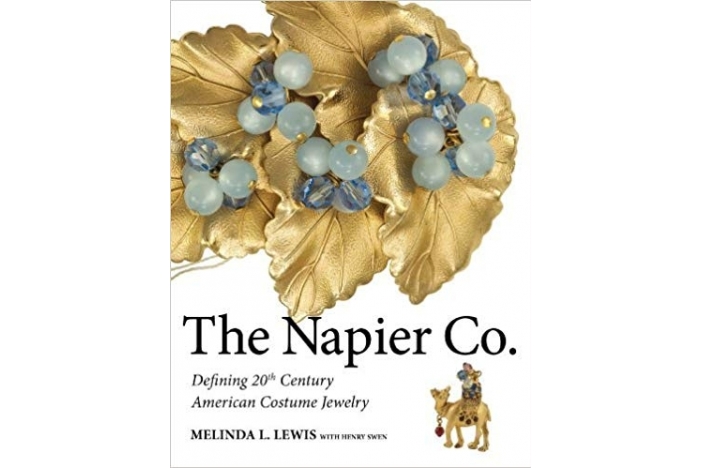 Napier frog brooch, gold-plated gilt frame with rhinestones, 1960`s ca, American.This brooch has been gently cleaned while respecting the vintage patina and is ready to wear. New gift box included. This vintage Napier pin features a frog in movement. Great for a lapel or to pin on a purse. The body is in a gold gilt polished finish, with scales all over except for the feet. The textured scaling adds depth and a glitter shine. The eyes are two large sparkling emerald green rhinestones. The back of the pin is in gold gilt, featuring a roll over clasp. Napier is stamped on the back of one foot. This pin is in very good condition. The gold gilt is all present and both rhinestones are in very good condition. The pin on the back works well . A new gift box is included in the price. Additional dimensions: The pin alone is: Height: 3.5 cm, Width: 4.8 cm, Depth: 1 cm. The box is: Height: 3 cm, Width: 8.6 cm, Depth: 9 cm.NAPIER JEWELLERY HISTORYThe Napier Company started in North Attleboro, Massachusetts, USA in 1878. James H. Napier became president of the company in 1920, and the company was renamed, The Napier-Bliss Co. The company was known for its ability to be on the forefront of fashion and had a history of sending its designers to Europe. In 1925, James Napier attended the World`s Fair Exposition Internationale des Artes Decoratifs et Industriels Modernes in Paris, and brought back with him business ideas, including designs influenced by Parisian and European fashion. Mr. Napier himself, did not design jewelry. James Napier work for the company, as president, from 1914 to his death in 1960. In the 1920`s and 1930`s, Napier designed necklaces, bracelets and earrings in a range of styles including designs featuring Egyptian motifs, such as cobras, Victorian Revival designs and Art Deco style motifs. The company produced very little jewelry during the 1930`s, focusing on its giftware lines. In the 1940`s, most of the jewelry produced was sterling silver tailored pieces. In the 1950`s, it produced jewelry in a wide range of styles. In the 1950`s, the Napier Company presented First Lady Mamie Eisenhower with a bracelet bearing an elephant design, which was reputedly one of her favourite pieces of jewelry. Napier jewelry is still being manufactured and distributed however under the umbrella of Jones Apparel Group. A good research source book is: "The Napier Co.: Defining 20th Century American Costume Jewelry by Melinda L. Lewis & Henry Swen (2013).